Porta Portese its the biggest Sunday flea market of Rome. Though its not as used to be, quite chaotic, sometimes even thrilling (sometimes police has to be called because somebody  found some object stolen earlier at their homes ). Today, though more structured as any other market, its still full of surprises, like: 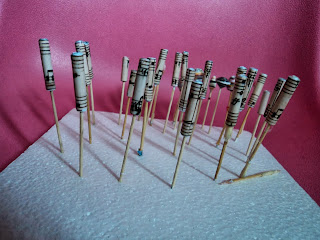 More paper beads. This time I wished to try music sheet and  something different; but as the original was a vintage sheet music, I didn't wish to ruin it, so I made a copy and tried. Hmmm...
Posted by Juana at 11:09 PM No comments: 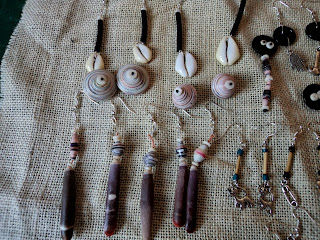 What is my favorite craft? Well, I love to do: 1)necklaces. 2) bracelets. 3) patchwork.
Earrings were not in the last place of my preferences... until I started to sort my stash... And the earrings madness started. This is my first bunch, and they will be going right to Berlin...
Posted by Juana at 11:19 PM 4 comments: